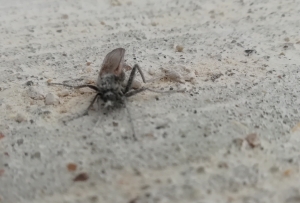 Day 28: One of the comments from last session’s river nymphs alerted to Percy Shelley’s 1918 poem The Woodman and the Nightingale here – in which he incorporates the Greek dryad or spirit of the tree. The woodman hates the song of the nightingale, but the bird unites all the other creatures of the forest; every soul except the woodman’s is moved by the nightingale. The woodman spends his days chopping down trees, each of which contains the soul of a wood nymph which provides beauty and shelter to the world. The world is full, says Shelley, of people like the Woodman who expel Love’s gentle Dryads from the haunts of life, And vex the nightingales in every dell.

The creatures of the High Wood are all stimulated and brought together by the bird’s song. The woodman’s stance threatens this entire community – Shelley is warning men not to steel themselves against the beauty of nature. The Romantic poets thought of themselves as metaphorical nightingales uniting people through their words; sculptors do the same thing, waiting for others to see forms and – at Horsham – join in with creating them.

The discovery of the poem is serendipitous as it give some broad support to our emerging, hidden larger figure – a soul of the trees. The woodman is perhaps a symbol of civilisation; the demand for growth leading to habitat destruction. But we have a counter story here – the planning system protects, and Berkeley Homes as a ‘placemaker’ is both careful with the stretches of countryside (like our upper Arun Valley corridor) and actively wishes to restore or integrate new green spaces. Our heritage oaks form what helps makes Highwood Village special – and why perhaps people might choose it over living somewhere else.

Day 29 saw new young carvers, the first spotting things in the stone that the sculptor had not seen. This is exactly the role that transforms a sculpture, either bolstering what is there or perhaps influencing taking on board something new or better. He ‘gets’ the water stream coming in over the mill wheel but saw the abrupt, abstract end as a ‘pipe’ (see the far right of the form just above the wheel). That sums up how I want it to convey – the sculpture sits in reality but borrows dreams beyond the edges of block. 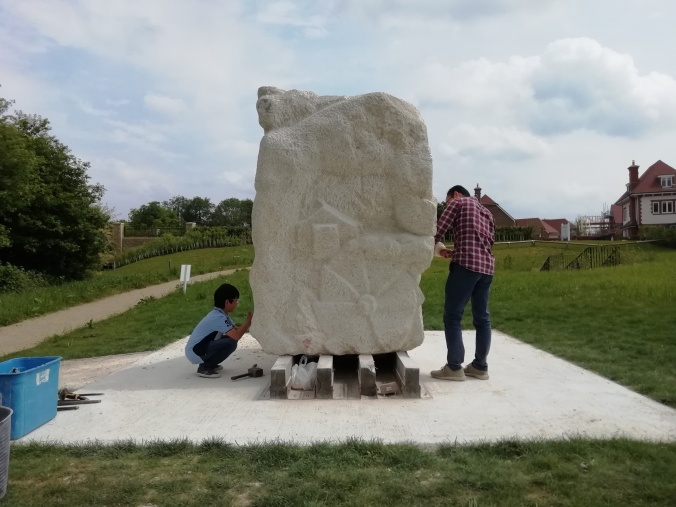 Our second new carver might be our youngest yet, but proof that hand/eye co-ordination can be practised even at two. Our block can be his dinosaur stone; or at least muddy, shelly fossils left below where the Jurassic plesiosaurs and ammonites were a-swimming. 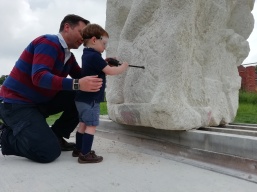 Some things to look out for on your next visit:

a lost monkey on the bridge, with the sculpture in the far ground 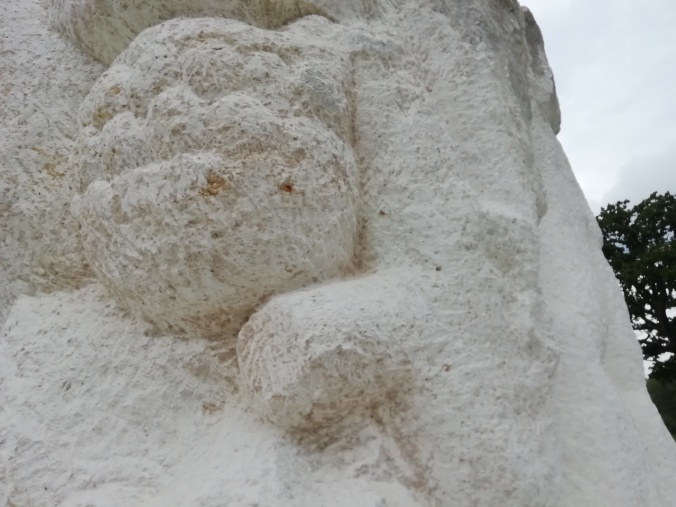 Leave your own thoughts Cancel reply